International Aid Saving the Philippines, or Not? 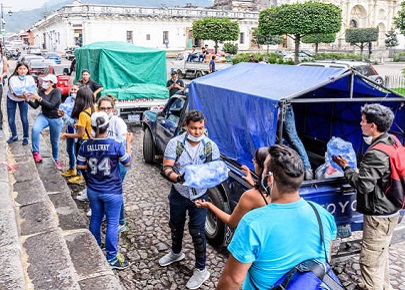 Natural disasters have a deep emotional effect on humanity, and Typhoon Haiyan was no different.  It is part of being a human being to feel compassion, and a strong need to help those who are in a horrible situation. That is why charity usually rushes in after a major natural disaster that makes global media coverage.  We tend to think of charity as a solution to mankind´s problems. Those who have more share part of their good fortune with those who have less, and the problem is solved! It sounds logical, but it doesn’t work that way.  Good intentions alone do not end humanitarian crisis. In fact, taking a look at some previous cases, they can make things worse. This has been the case many times.

International aid is not the solution to the damage that a disaster may cause. It is helpful, of course, and if managed properly can save countless lives. On a first stage, foreign aid is fundamental to end with the lack of clean water, food and shelter. Attending basic sanitary needs is also a  priority in order to prevent worse scenarios –like cholera or other disease outbreaks-. However, it is only the first step.

Haiti suffered from a devastating earthquake almost 4 years ago. An estimate of 220,000 people died and around 300,000 were injured due to the disaster. The losses represented more than 120 percent of their GDP at the time. The international aid amounted to $450 million US dollars. One of the reasons why international aid failed in Haiti was that the foreign presence undermined the ability of Haitians to make decisions about their own country´s recovery. Their real needs, their vision of recovery and of the future were negated and instead the international community and aid agencies imposed what they thought would help, out of any real cultural or social knowledge of the country.

One of the biggest challenges the Philippines has now is managing the almost $540 million US dollars that have been pledged in foreign aid. This time the Philippines government created a web portal where people can keep track of the cash and goods received and how it is being distributed. This was a great initiative, especially for a country that has gone through so much corruption and fraud.

Earning a living after disaster

Typhoon Haiyan did not affect everyone equally. During emergency times social and economic inequalities emerge.  Official statements from the government say the economy will recover easily because the main damages are located in places away from the industrial centers. The GDP might not have been seriously affected, but the residents from the damaged areas have. These people will have to find how to earn a living again, in a land where people depend from agriculture and crops that were completely destroyed. Will foreign aid help these families? Experience from previous natural disasters has demonstrated that financial aid is used to deliver goods and rebuild infrastructure, but not to help all people get back on their feet and start producing again. When people cannot produce and take care of their families, poverty and crime rates rise. Investigators in the Philippines say there has already been an increase in fraud related to charity.

Is the country prepared to face the social consequences of super Typhoon Yolanda? Learning from experience should be a cornerstone for the Philippines.  The people are counting on it.